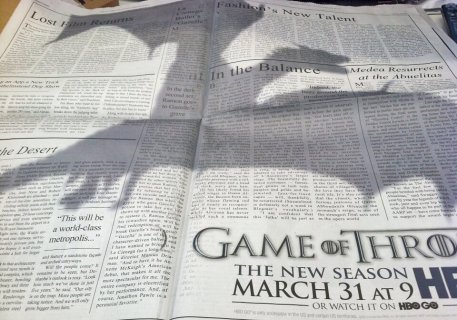 The New York Times has published a column about the business in its pages since 1935. But it’s not clear whether that feature will continue in 2015.

In the wake of news that Stuart Elliott, the New York Times staffer who has led the paper’s “Advertising” column since 1991, is among tens of staffers taking a buyout, a spokeswoman for the publishing company said a decision about the feature is not likely to be made for several weeks. Elliott is one of a number of staffers who have opted to take buyouts as the company seeks to winnow its staff, and, as a result, its cost structure. The New York Times has said it is seeking to reduce its ranks by 100 positions.

“Given that we’re still in the middle of this buyout process, questions like this specific one are not likely to be settled until early next year. Departures will necessitate reassignments and reconsideration of roles in various places around the newsroom and those decisions will be taken up at the conclusion of this process, ” said Times Co. spokeswoman Eileen Murphy, in an exchange made via email.”I can tell you that we remain committed to full and complete coverage of all aspects of the media industry, including advertising.”

In addition to Elliott, TV reporter Bill Carter and publishing-industry reporter Christine Haughney have also disclosed they will take buyouts and leave the newspaper. The Times has often employed freelancers to pen its “Advertising” column on various days of the week.

If the Times were to discontinue its “Advertising” column, it would mark the end of what was once a staple in many large American newspapers. For years, the Times, the Wall Street Journal, the Chicago Tribune, the Chicago Sun-Times and USA Today had reporters on staff who were devoted to coverage of advertising, and many of the papers reserved space once a week or even once a day for the latest news of the advertising industry: account wins and losses; new hires; new campaigns; and the ripples ads often caused in popular culture. In a different time, George Lazarus, Phil Dougherty and Lewis Lazare cut impressive — even fearsome — figures when they served as ad columnists for the Tribune, the Times and the Sun-Times, respectively.

The ad business — or at least what once constituted it — has been severely disrupted by new technologies, however, since their heyday. In 2014 big TV-ad campaigns are giving way to smaller ones spread across niche cable programs or social media. Print advertising is morphing into so-called native ads that look much like the editorial product they support. Measurement of ad reach and impact has become a tremendous problem for marketers of all stripes. Advertisers are less interested in making a splash with every single consumer. Instead, they are driven by data from TV set-top boxes, Web clicks and customer-loyalty cards that give them granular information on what kinds of consumers buy their products as well as the circumstances that lead them to do so.